The Friends We Leave Behind

This excerpt from Dana Crum's novel At the Cross appeared in the May 1999 issue of The Source. 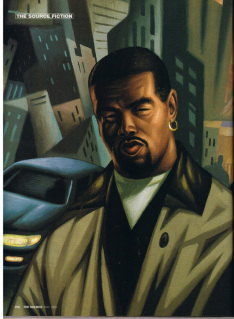 He and whoever else might be inside were concealed behind tinted windows. Often Rob and the others would race one another up and down the narrow car-lined street, peeling off and performing dangerous high-speed U-turns. So Junebug's driving didn't disturb Sidney. D'Angelo's silence did, as did the silence of the neighborhood. The strip, where Rob and his crew normally stood laughing and drinking and smoking, was vacant. Sidney and D'Angelo's very surroundings—the buildings, the yards, the street itself—seemed like some mammoth animal sprawled out around them, watching them, waiting to swallow them whole. Sidney's heart pounded so hard he could hear its thick liquid thuds in his ears.

The Maxima's passenger door swung open. But no one stepped out.

"Sidney," D'Angelo said softly, calmly, without turning away from the car, "I want you to go get somethin' out the house for me."

All night Sidney had been asking him why he was so quiet, what was on his mind. And strangely enough, D'Angelo's temper hadn't flared as it normally would when he was pressed about something. And now this. "For the last time," Sidney said, "would you tell me what the fuck's going on?"

"Nothin'. But I need for you to go get my car keys. I left them in the living room. On the coffee table."

"You do it!" D'Angelo shouted, shoving him up the hill. "I need to talk to Rob."

"Would you fuckin' go?" D'Angelo shouted.

"All right! But stop yelling at me! Damn. You haven't even given me your house key yet."

D'Angelo slapped the key into Sidney's palm, but when Sidney tried to walk away, he couldn't. D'Angelo was gripping his hand.

"What is it?" Sidney asked.

D'Angelo's lips fell apart. But it was moments before he spoke. "When you got into all them colleges, I ain't never tell you this, but. . . you know. . . you know I'm proud of you, right? You know that, don't you?"

"Yeah," Sidney said, though he hadn't known until just then. It had taken months for D'Angelo's reaction to the acceptance letters to move from resentful reticence to vague verbalization of his feelings. And so it had taken months for him to finally express his fear that Sidney, once in college, would disown him and Jamal. During all the tension, both covert and overt, that D'Angelo might be proud had never crossed Sidney's mind.

As Sidney climbed the hill, he tried to process all that had just happened. By itself, the possibility that D'Angelo was getting rid of him was nothing to be alarmed about. Many times in the past D'Angelo and Jamal had gotten rid of him when they needed to do things for Rob that he couldn't witness, when they needed to discuss things with Rob that he couldn't overhear. So maybe nothing was wrong. But never had D'Angelo behaved so strangely—the silence, the rush toward his car as if he were fleeing. And then Junebug careering toward them as if to catch him. Yet most alarming of all were his comments just now. From him, someone who was rarely demonstrative, they were like the final words of a condemned man. Sidney's scalp tingled hot. He stopped. He turned.

Just as he did, a burly figure rose out of the darkness of the car. Over his head was a pointed hood; in his hand was a gun. Sidney ran, but in the slow drugged unreality of a dream, his movements seemed sluggish and drawn-out, and the gun's pale yellow flame pointed at D'Angelo like a finger. D'Angelo's skull cracked. Blood spurted out. Sidney shouted but knew he was shouting only by the ripping strain in his throat. Gunshots boomed through the air, D'Angelo's body jerking like a tortured marionette. Then silence swallowed all sound; and D'Angelo, a bleeding slab of meat, fell to the ground.

Rob and Junebug had already sped away by the time Sidney reached him. Sidney dropped to his knees. As a chain of coughs was dragged up from D'Angelo's chest and out from his mouth, thick threads of blood leaked from his lips. Somehow he managed to speak, his voice thin, like wind through a cracked window. He explained that Rob, in order to kill him, would have killed Sidney too. But Rob must have noticed his attempt to get rid of Sidney. "At least that fat bitch was nice enough to wait," D'Angelo whispered, and somehow he found it possible to laugh. His teeth were red. Sidney looked away, but the thought he'd until then been able to hold back came crashing down upon him—it was his fault D'Angelo hadn't escaped in time. D'Angelo's hurried strides had come so close to being a jog, it seemed irrefutable that he would have sprinted had Sidney not come outside at that moment, asking questions. Sprinting would have saved D'Angelo's life, but it would also have further alarmed Sidney. And Sidney, knowing him as well as he did, knew D'Angelo probably worried that running would have made him seem like a frightened punk—a prospect his deep-seated machismo could not endure.

While blood streamed down the hill, D'Angelo's hand clutched Sidney's like a pair of pliers. But soon the hand was as cold as the steel of pliers, and Sidney had to pry the fingers from his own.

Days passed before Jamal could bring himself to talk about the murder. Only then did Sidney learn what had made Rob thirst for D'Angelo's blood: after D'Angelo set up a drug deal with some big-time Dominican supplier from New York, he and Rob nearly came to blows over how to divide the coke. D'Angelo, who'd been promised more than he received, felt so betrayed and manipulated that he stormed out of Rob's apartment, vowing to use his share to start his own crew. When he saw the strip vacant later that night, he knew his life was in danger, in grave danger given that he couldn't protect himself. Months ago, after almost shooting someone who only seemed to be about to shoot him, he'd decided never to carry a gun again. So his only recourse was to rush toward his car. But once Rob and Junebug pulled up, there was no way to save himself. So he saved Sidney. At the morgue the car keys Sidney had been sent to retrieve were found in D'Angelo's pocket.

Now, a week later, Sidney tried to blink back the blood, but there was no use and all he could do was stand there, only yards from where it had happened, and wonder what right he had to be still alive. He'd never hustled like D'Angelo, but he'd gone to parties he should have stayed away from, tried to talk to girls who dated crazy trigger-happy drug dealers, and yet he was still alive, his blood in his arteries and veins and not on the sidewalk where the concrete would have sucked at it and swallowed its wetness, the way it had swallowed the wetness of D'Angelo's blood by the next morning. All that was left behind was an amorphous sun-heated smudge. He turned to Jamal and imagined him prostrate upon the pavement, his jersey soaked with red syrupy stains. Frowning, searching for fresh images, ones that would rinse his mind clean, Sidney surveyed the street. His eyes fastened upon a stream of cloudy water, but suddenly it became a river of blood sloshing down the hill.

He cupped a hand over his mouth. His insides had melted—the way they had the night of D'Angelo's death—and he could taste the hot bitterness of a drop of vomit on the base of his tongue. Knowing there was more to come if he didn't force it all down, he swallowed bland saliva, again and again, and only then did the rising liquid slide back down his throat, back down into the well of his gut.

Jamal glanced at him but said nothing. Sidney let his hand drop to his side.

The hair atop his uncovered head was a dark wet rag. Soon it stopped raining. Wisps of steam snaked up from the street. Sidney could hear the hot wind, like some displaced sirocco, howling through the streets and howling in his ears, and he could hear Jamal ask him in a near whisper to walk with him to his building. Mechanically, saying nothing, Sidney complied. As they moved down the hill, he was aware but oddly unconcerned that they were drawing closer to Rob and his crew. He felt as though he were floating, and it seemed that he was both there and not there, that he was walking but was also watching himself from afar. When they reached Jamal's building, Jamal put out his hand. Sidney could not manage a reaction but managed to resist the soreness swelling behind his eyes and clogging his throat. Relieved he'd been able to dam up the tears, he extended his hand, expecting Jamal to give him the handshake the two of them and D'Angelo made up years ago. Instead Jamal embraced him. Before Sidney could react, Jamal nearly shoved him away. In Jamal's eyes flames of pain tempered with pride flared. His eyes managed also to accuse, and Sidney, had he been able, would have looked away. Then Jamal was gone, walking rather than trotting up the steps to his building. Sidney realized he might never see him again.
PREVIOUS PAGE
back to PUBLISHED WORK