On the Playground, On the Block

This excerpt from Dana Crum's novel At the Cross appeared in the Spring 2001 issue of African Voices. 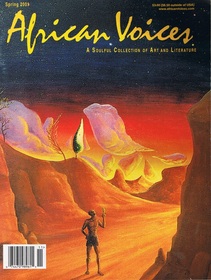 After Sidney and his mom moved to D.C., he passed the first few weeks pouting and sweating. Fans rattled in the windows but blew in only heat, which compounded the heat seeping in through the walls and rising from the floor. It was worse inside than out, making that first summer in D.C., even worse than those he'd experienced in Alabama. There he and his mom had lived in his grandmother's bungalow, where hot air couldn't rise and gather at the highest of several floors as it did now in the cramped, top-floor apartment that was his new home. To escape the heat, as well as the equally stifling boredom, he began going out on the block for more than an RC cola and a bag of corn chips.

On one such evening he sat alone on a parked rusting Pontiac and, scowling, recalled what he'd accidentally stepped on on his way downstairs a few minutes ago. He'd heard a snap! and then a crunch! and had lifted his shoe only to see the thick, white guts of a cockroach splattered over the floor and over both his sneakers. The glossy, black-and-brown shell was cracked and flattened. The wiry antennae and thorny legs fluttered for a moment, then stopped altogether. Nauseous, he feverishly scraped his shoes against the floor to clean them. And now, outside, he gazed at the redbrick tenements, broken sidewalks and slanted dirt yards besieging him and longed for the waving arms of trees, nodding heads of flowers and lush pools of grass around his grandmother's small but clean, white-and-green house. He wondered what the friends he'd left in Birmingham were doing at that moment. Probably, they were riding their bikes down the street, every now and then one of them popping a wheelie while the rest sat crouched over their handlebars in the position their mothers warned would ruin their posture. Sidney was staring at the foot of the hill, wondering what they would do later on when he noticed, less than a second away, a football zipping toward him in a tight spiral. "Catch the ball, man!" someone shouted, and Sidney threw up his hands, his usually reliable hands, but the ball bounced off them and spun in the air before clattering to the ground like a clumsy bird.

"Ahhhhhhh!" chimed in the chorus at the foot of the hill, the same kids who'd been playing football in the street when Sidney walked out.

The ball waddled down the hill. With stinging throbbing fingers, Sidney managed to pick the ball up before it could pass him. One kid broke from the group and pimped towards him, a loose swing to his limbs despite his haste.

"Hey, youngin'!" shouted one of the kid's friends. "I bet you ain't know you was throwin' to Jackie Slater, did you?"

The kid glanced over his shoulder and grinned. Then he quickly closed the distance between himself and Sidney.

He wasn't grinning anymore. "Throw the ball, man," he ordered in a deadpan tone, his hands at his shirtless chest. His eyes were light brown like his skin and lips, and he looked to be Sidney's age, ten years old.

Sidney lobbed the ball and the kid caught it with ease.

"That's how you catch," the kid said, a laugh lurking in his throat, making his voice suddenly raspy, mischievous.

"I can catch," Sidney said.

"What you say, Jackie?" The kid brought a cupped hand to his ear to feign bad hearing.

The kid's eyebrows rose as a wry smile sneaked across his lips. Then the smile fell away and he said, "A'ight. Go out for one then. A long one. A bomb."

Sidney sprinted up the hill, knowing no car was climbing the other side because instead of hearing an engine straining he heard only the clink of his house key against the change in his pocket. He sprinted faster, faster, vowing he would catch this pass, no matter what, and then the kids down the street wouldn't be able to laugh at him any more. Near the top of the hill but still running, he glanced over his shoulder; and the kid, now tiny in the distance, cocked his arm. Sidney's entire body braced. But then the kid turned and sauntered away. Guffaws erupted from his friends' mouths. Sidney stared down at them from the hill's height, suddenly hot, his hands tightening into fists like the heads of snakes ready to strike. His friends in Alabama would never have treated him that way. Why did his mom have to move him to this stupid city anyway? In Birmingham they'd lived just up the hill from a neighborhood like this. But now they'd tumbled right down into the projects. While Sidney stood there clenching his teeth, the cords of muscle in his jaw straining, the kid in one motion did a one-eighty and drilled him the ball. Sidney's heart pounded and he forgot how to catch; but with the ball slicing through the air toward him, soon to hurtle past his left shoulder, he remembered and thrust out his hands and snagged the ball from its rocket-like path. He lined his fingers up with the soiled laces and met the stare of the kid standing in the distance.

As Sidney wandered down the hill, the kid strode toward him.

"You on my team next game!" the kid shouted. "I ain't think you was gon' catch that shit! Nobody never catch my passes when I drill 'em!"

Sidney stopped a few cars away.

But the kid didn't stop until he and Sidney were standing face to face. He glanced over his shoulder, then whispered conspiratorially, "Me and you—we can take these niggas, youngin'. You go out for passes, I throw. We beat them niggas wit no problem."

The kid's face twisted derisively. "Fuck kinda name is that?"

"Ain't that a country in Africa or somethin'?"

"It's a city in Australia," Sidney explained.

"A strange name is what it is. I ain't never heard of nobody wit no name like that before. Me? I'm D'Angelo."

But that's a strange name too, Sidney wanted to say.

"But forget all that. Ya name could be Kunta Kinte for all I care. As long as you can catch." D'Angelo eyed him for a beat. "But you still gon' be on my team, right?"

Sidney drilled him the ball. "I don't wanna play." And he went inside and left D'Angelo in the street, tossing and catching the ball.

A week later, days into the school year, a burly light-skinned kid whom everyone called "Junebug" went out of his way to bump Sidney's shoulder only to then shove him as though the collision were his fault. Sidney stumbled and nearly fell into the squelching mud. "He almost fell!" a kid on the playground shouted and laughed. "He fell! He fell!" another exclaimed. Kids hopped off the merry-go-round and monkey bars and swings and ran jeering towards Sidney and Junebug. When Sidney stepped out of his daze and realized his opponent was nearly twice his size, he thought, Run! But it was too late now—the kids had formed a teeming ring around them, a moving wall of flesh. It was then that he recognized Junebug as one of the kids who'd been playing football that night. Junebug's voice was hoarse. "What's up, white boy?" he said, though only a shade or two darker than Sidney. Sidney didn't respond and only stared into Junebug's face, which was turgid and yellow and dotted with red pimples. So what his mom had long ago predicted of Alabama was going to hold true in D.C., as well: whenever the other Black kids wanted to hurt him, they were going to point to his being lighter. "I'ma fuck you up," Junebug promised, his guard up, his fat fists scarred, apparently from previous fights. His grin revealed chipped front teeth, additional trappings of a long fighting career. As he and Sidney danced around one another, the kids encircling them blurred into a spinning welter of faces and mouths and arms, and Sidney thought of the space-station ride he'd boarded so frequently at the summer carnival in Alabama, the ride that had buckled him and other kids spread-eagle against its ring-shaped wall and spun them around so fast their faces became melting streams of nothingness and their bodies were clamped immovably against the sides and would have been even without the restraints. But this was no amusement-park ride. There was a fat fist headed straight for his temple, and he had just enough time to duck. He tried to throw a punch of his own, but his hands were suddenly blocks of lead. The other fat fist, along with its attached forearm, was torpedoing toward his stomach when D'Angelo pushed him and Junebug apart and stopped the fight before it could really begin, saving Sidney from what would certainly have been an extensive, multi-faceted ass-kicking that would have followed him the rest of his life.

Junebug gave D'Angelo a long, hard look. Then he muttered something obscene and lumbered away, across the brown sea of mud. Sidney and D'Angelo headed in the opposite direction, toward the school.

Sidney stared down at the ground. "Thanks," he said.

They were silent for a while.

"You still want me to be on your team?" Sidney asked.

"Hell YEAH. Why else you think I saved yo' butt?"

Sidney smirked. And the two of them stepped inside the school.