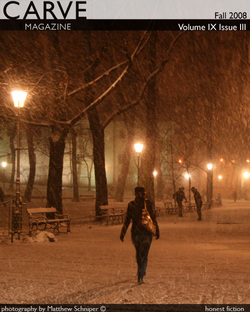 Sidney had just graduated from high school; and beyond the gleaming limestone columns of D.C.'s Constitution Hall, people he didn't know were commending him for his valedictory. His speech also elicited reactions from his friends. Jamal patted him on the back. Jamal's brother, D'Angelo, looked away, then muttered that he was going to get the car. Sidney watched his brawny frame, clad in khakis and a burgundy knit top, recede into the throng, where black caps and gowns abounded.

The darkness swelled with heat, and many graduates began to step out of their gowns. But Sidney kept his on.

"I know she feel bad about missing this."

"Yeah." Before graduation Sidney had gone to the hospital to see her. He strode through the halls and through the strong smell of Lysol, and once inside her room he sat in the orange plastic chair beside her bed. They talked for a while. Then she asked him to read his speech. As he read in the weak glow of the single working light, she lay with the bleached sheets drawn up over her short rotund body. Her eyes glistened wet. "I sure wish I could be there," she said when he was done. She smiled and touched his hand. "It's beautiful."

His gown fluttering in the useless breeze, he realized there would have been a scene if she had been able to make it: she would have refused to ride in the same car with D'Angelo and Jamal.

Though apparently unaware of this fact, Jamal was aware of another one.

"If she wasn't in the hospital," he said, "yo' ass wouldn't be hanging out late to-NIGHT." He was grinning, but his lips were so thick they seemed nearly closed.

"Yeah, well, unlike you two niggas, I still live at home with my moms."

Sidney had meant no harm, but his remark peeled the grin from his friend's face. Jamal gazed off into the distance. Jamal was thinking, Sidney surmised, of his own mother. Two months ago she'd caught him and D'Angelo out on the strip hustling. She found crack vials in their fists, thick wads of cash in their pockets. While D'Angelo explained that he and Jamal didn't want to be broke-ass losers all their lives, that they didn't want to waste four years in some stupid college when they could clock G's right now, she apparently wasn't all that receptive to their line of reasoning. Certainly no more receptive than Sidney had been when they ran the same explanation by him a year earlier. She kicked them out. They'd been renting their own apartment ever since.

Sidney's mom, when she found out what they were doing on the corner, ordered him to sever all ties with them. He was able to maintain the friendship only by deceiving her. If she'd been there tonight, she would have demanded an explanation for why they were. What would he have said?

Roused from whatever thoughts that had enthralled him, Jamal pointed to the corner. "There go D. It's about fucking time."

Sidney was surprised to see D'Angelo driving Jamal's 5.0. Candy-apple-red with tinted windows and chrome five-star rims that shimmered even now, in the absence of sunlight, the 5.0 wove its way through the teeming traffic. The system was blasting. With each hammer-like boom of the bass, all the metal in the car rattled, then vibrated.  D'Angelo always played his music loud. But never this loud. Sidney knew he'd turned the volume up so high to preclude any conversation from developing once all three of them were in the car.

Great, Sidney thought. We're going out to celebrate and he's in a bad mood.

When D'Angelo pulled over to the curb, Sidney and Jamal carved a path through the thick crowd and got in. Because of the beastly might of its engine, Sidney had always preferred the 5.0 to D'Angelo's white-and-gold Jetta. He couldn't refrain from smiling as he seated himself up front.

D'Angelo pulled off. Like some vast black ocean, darkness had engulfed D.C.; and in the distance the white, gleaming dome of the Capitol was an immense, slow-motion buoy floating on the surface. The building moved as they moved, now edging toward them, now drifting away as D'Angelo turned and headed down a side street.

He was driving slowly, another uncharacteristic act that confirmed his bad mood. Sidney sighed. He hadn't been in the car in a while; he wanted D'Angelo to gun it.

"Yo, turn that down for a minute," Jamal said.

D'Angelo turned the music down, but not without frowning.

Jamal, who was sitting in the back, apparently hadn't noticed his brother's facial expression, for he chuckled and said, "Remember Sidney speech? Man, I thought this nigga was 'bout to start preaching up in there, man. Get Jesse Jackson on they ass. Start rhyming and shit."

Sidney, whose speech had espoused self-sufficiency without rebuking the black working class or threatening white America, smiled at the thought of saying such things before a black crowd. He laughed when he imagined Jesse saying them.

Jamal was laughing too. But D'Angelo's bearded face remained rugged, hardened and expressionless.

"Did you write that at home?" Sidney asked.

Jamal shook his head. "Nah. I just made it up."

"Where's the time?" Jamal was silent for a beat. Then his eyes narrowed and suddenly he was as serious as D'Angelo. "On the real, though. What was that shit you said on stage tonight?"

"What do you mean?" Sidney answered.

"You said something about changing the community."

Earlier that night, speaking with a rhythm that had rendered his elevated sentences incantatory, Sidney had held the crowd under his sway. But now he spoke flatly as he recited the passage Jamal had zoomed in on. "'Change in our community must begin as change in each individual.'" He stopped there. "You mean that part?"

Sidney was about to lie and say he couldn't remember the rest, but then he thought, What the hell. Maybe I deserve this. And he continued with his speech. "'Yet we can withstand the whirlwinds of oppression only by deracinating the weeds of our self-doubt. Not until then will we bear beautiful blossoms of our own choosing rather than repugnant crops planted by society.'"

What was he thinking?

"It was a good speech, youngin'," Jamal said finally. "But, man, where you get all them words from?"

"From reading." Sidney exhaled from deep down inside his lungs, relieved that section of his speech had been vague enough to elude his friends. They had no idea their actions—dropping out of high school, selling the drugs pumped into the ghetto—constituted the "repugnant crops planted by society." They had no idea he'd denounced their way of life.

Fortunately, they didn't ask him to explain the meaning behind his metaphors. They would have asked him to explain his metaphors and much much more if he hadn't thought to delete part of his speech. The part that had added to self-doubt the other impediments to the transcendence of inner-city blacks: impatience and greed. At the mention of those two words, D'Angelo and Jamal would have known he was alluding to hustlers in general and to the two of them in particular. They might have somehow figured this out even if he'd replaced "impatience" and "greed" with obscure synonyms. So he didn't take any chances.
NEXT PAGE
back to PUBLISHED WORK