Hard Labor: Scholars Chronicle the Relationship of African Americans to Unions and the Industrialization of America

This round-up review by Dana Crum appeared in the Sept./Oct. 2006 issue of Black Issues Book Review. 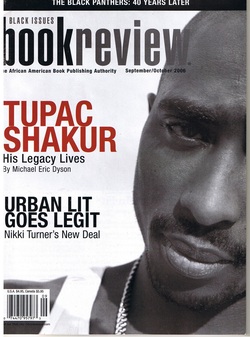 Since Reconstruction, blacks’ unionization activity has taken two forms: attempts to integrate large white labor groups and attempts to build black unions. Early on, whichever form the activity took, the black workers behind it were fired, blacklisted and attacked by police, militia and mobs.

White unions eventually began to integrate – but with all deliberate slowness. For African American laborers, faith in white unions alternated with distrust: Faith infused the Civil Rights Movement while Black Power was ingrained with distrust. During the latter period radical black unions emerged, and large integrated unions responded by opening leadership posts to moderate blacks and developing training and apprenticeship programs that gave some black workers the upward mobility they had long sought.

Despite these changes, African American representation in union leadership, discrimination in hiring and promotion, and training for highly skilled jobs remain problem areas for organized labor. 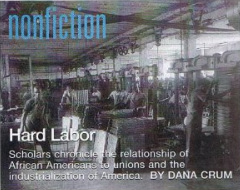 Given how badly white unions treated black workers for most of the last 141 years, one of the opening sentences of Paul D. Moreno’s Black Americans and Organized Labor: A New History (Louisiana State University Press, January 2006) may come as a shock: “Today, black Americans are the demographic group most likely to belong to a labor union.” But according to Race and Labor Matters in the New U.S. Economy (Rowman & Littlefield Publishers, Inc., June 2006), edited by Manning Marable, Immanuel Ness and Joseph Wilson, unions have not done enough to save black people’s government jobs, which are being erased by the privatization of the public sector.

To account for organized labor’s racist past, Professor Moreno for one proposes an economics-of-discrimination interpretation that examines the interplay of race, economics and law. Generally speaking, unions’ discriminatory practices cannot be blamed on employers, he argues. Employers do not normally “foment racial antagonism to keep the proletariat divided and weak.” Rather, they try “to pay as little as possible for labor, regardless of ethnicity” or race. It was usually white union members, not employers, who created and benefited from discrimination, Moreno adds.

In Poor Workers’ Unions: Rebuilding Labor from Below (South End Press, January 2005), labor activist Vanessa Tait lays out the history of poor workers’ unions, which developed as an alternative to traditional labor groups (i.e., trade unions typically affiliated with the AFL-CIO). These alternative unions generally represent workers “at or below the poverty level” who toil in various trades and industries, including food service, home health care, domestic work, manufacturing and day labor. The groups range from civil rights—based job campaigns and welfare rights organizations to domestic workers’ unions and feminist labor groups. Most members are women and people of color.

In the ’60s and early ’70s, Tait explains, the destitute created their own unions because trade unions “did not believe poor workers could be organized, either because of their fluctuating job status, or because of prejudices against their race, ethnicity, gender, poverty or immigration status.” The traditional labor movement, she concludes, has become “an institution protecting the organized few, instead of a broad social movement representing the interests of all workers.”

White sociologist Christine L. Williams goes deep cover as a low-wage retail worker at two national toy store chains in Inside Toyland: Working, Shopping, and Social Inequality (University of California Press, January 2006). Her findings are disturbing but not surprising: “Workers are sorted into jobs on the bases of race and gender, resulting in advantages for white men (and, to a lesser extent, white women) and blocked opportunities for racial/ethnic minority women and men.” Echoing Tait, Williams writes, “Historically, unions have not successfully redressed exclusionary hiring and promotion policies that favor whites over racial/ethnic minorities and men over women.”

Black women’s labor during the antebellum period is the focus of Xiomara Santamarina’s Belabored Professions: Narratives of African American Working Womanhood (The University of North Carolina Press, October 2005). As Professor Santamarina notes, the paltry wages free black men were paid made it “absolutely necessary” that free black women work. Barred from most trades, they toiled as manual workers and domestic servants. Many felt these occupations degraded and degendered black women. Sojourner Truth, Eliza Potter, Harriet Wilson and Elizabeth Keckley disagreed and gave voice to their opinions in writing.

In their autobiographies, which Santamarina thoroughly dissects, they described their labor as both valuable and respectable. Many black leaders bristled in response, believing racial advancement depended upon the creation of “male-headed households in which wives, daughters and sisters” remained home and raised children. Championing black women’s right to work rather than promoting the abolitionist agenda, the narratives Truth and company wrote diverged from the norms of the African American autobiographical tradition.

African American men were “at the center of the story of modernization in the South.” Such is the contention of William P. Jones in The Tribe of Black Ulysses: African American Lumber Workers in the Jim Crow South (University of Illinois Press, April 2005). The lumber industry between 1870 and 1910, he writes, “grew faster and employed more workers than any other industry in the southern United States.” “Whereas other industrial employers marginalized or excluded black workers, African American men formed the majority of the southern lumber workforce.…Before World War II, no other industry employed more African Americans.” In their fight for fair wages, black lumber workers—Professor Jones notes—received help from unions, with interracial harmony prevailing in some cases.

Black Workers’ Struggle for Equality in Birmingham (University of Illinois Press, December 2004) also focuses on Southern black laborers. Edited by Horace Huntley and David Montgomery, the volume is the first in a projected series of books, each containing transcripts of interviews conducted by the Birmingham Civil Rights Institute’s Oral History Project. All interviewees are former civil rights activists who belonged to the city’s industrial workforce.

As Professor Montgomery points out in the Introduction, “The unions were crisscrossed with networks, caucuses, and study groups organized by black workers. These informal organizations directly linked black union members to civil rights mobilizations based in churches and in community organizations,…[and] made the better known marches and court cases possible.”

Matthew Whitaker’s Race Work: The Rise of Civil Rights in the Urban West (University of Nebraska Press, November 2005) reminds us that the South, the East and the Midwest were not the only theaters of activity in the Civil Rights Movement. The book assesses the movement in Phoenix as well as the achievements of two of the most important black activists of the post—World War II American West: Lincoln Ragsdale and his wife Eleanor. Whitaker notes that Ragsdale and a compatriot succeeded in desegregating many of the city’s main corporations in 1962, two years before the U.S. Equal Employment Opportunity Commission was even established.