Excerpts from Dana Crum's novel At the Cross

These two excerpts appeared in the book AP English Literature & Composition for Dummies in 2008. 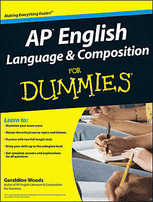 The pale girl was looking right at Sidney now. “It’s just not fair that some people have it easy while others are made to suffer. I’m from Scarsdale, New York, and some of my friends from Exeter couldn’t even get into Princeton because the school lowered its standards to let minorities in. It’s not my friends’ fault they’re White. Why should they lose out just because minorities can‘t score high enough?”

Beneath Sidney’s shirt a trickle of sweat streaked from his armpit to his stomach. His lips fell apart. But no words came out. He wanted to say that standards weren‘t as high when it came to White athletes like the husky football player, who‘d so far misspoken twice…

"Where you want this stuff!" Joe asked.

The boxes clunked as Joe knelt and dropped them beside Sidney’s portable stereo. Mr. Lewis and his potential fiancée slogged up the stairs, the things they carried clattering against the banister.

"There you are," she said, looking at Sidney as she stepped inside the room. "It’s a good thing you got the door open. ‘Cause we wouldn’t have known what room to come to."

"Sorry about that," Sidney said.

Against a wall she and Mr. Lewis placed luggage and boxes.

She exhaled deeply. "I must be getting old." She smiled and caressed her flaccid biceps. "That one little suitcase had my arms hurting."

"Mom, this is Brian, one of my roommates."

Brian shook her hand. "It’s nice to meet you, too."

"And this is Mr. Lewis," Sidney said with all the courtesy he could muster but without looking at the man.

"Call me ‘William,’" Mr. Lewis said, shaking Brian’s hand. "I’ve been trying to get Sidney to do the same, but he insists on calling me by my last name. Like I’m his boss or something."

Sidney knew he should banter with Mr. Lewis to show there were no hard feelings. But he said nothing.

"So, Brian," Sidney’s mom began and Sidney wondered if she was intentionally relieving the mounting tension, "I see you’re an early riser. I thought we were early. But you beat us here."

"Yeah, I don’t think my parents could have waited another moment to get me out of the house."

"We heard that, Brian," a baritone voice said, its Boston accent even sharper and swifter than Brian’s. At the bottom of the stairs appeared a man with a bald, perfectly round head and a short, stocky body. He took two steps at a time, a glass coffee table in his hands and a stuffed backpack over one shoulder. Behind him trailed a woman with bright eyes and red wavy hair, which she wore in a bob. She carried a lamp. . . in both hands.

"Dad, did you get lost?" Brian asked, in the doorway now.

"Only in conversation," his father said, pausing on the landing and facing Brian, who was much taller. Brian’s father hadn’t made room for his wife, so she stood behind him and beneath him, on the top stair. "We met some fellow parents outside. It seems they—unlike your mother and I, of course—were at first glad to be rid of their daughter. All summer she worried them to no end, anxious, able to think and talk about nothing but how fun and challenging Princeton would be. She and her parents couldn’t wait for the fall. But now that the moment of parting has come, neither the parents nor the child wants to say goodbye. Typical, isn’t it, dear?" he asked, turning to his wife.

"I know what you mean," Sidney’s mom began, and Brian stepped out of the doorway, apparently so that his parents could see who was talking. "A lot of times this week, I caught Sidney here just sitting on the couch, lost in thought."

"At first, I was worried," she continued, still watching him. "Then I realized. . . he’s just got school on his mind. It’s a big step. The biggest they’ve taken so far."

Sidney exhaled and realized he hadn’t been breathing at all. And now to inhale and exhale was so soothing to his body it seemed he’d discovered life’s greatest luxury.

As he watched his mom talk, watched her lips move and her hands gesticulate, it seemed he was meeting her for the very first time. He’d never known she was capable of such subtlety: just now, while making small talk with Brian’s parents, she’d managed to simultaneously carry on an inaudible conversation with him. This was the second time today she’d surprised him. First, his realization of why she’d dyed her hair and always wore trendy clothes. Now, this. And why did she tacitly broach the events and near-events of that hot August night? Probably to reprimand him yet again.
back to PUBLISHED WORK